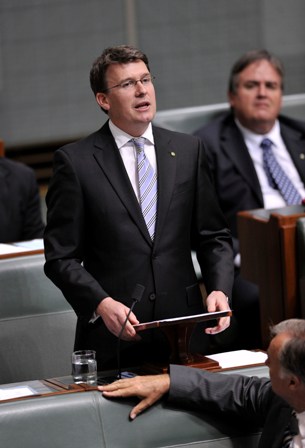 PARLIAMENT HOUSE, CANBERRA: This year students went back to university to discover that a condition of continuing their studies was a compulsory student services and amenities fee of up to $263. They did not have to pay that fee last year because it was voluntary, as it was for the six years before that. This is the only fee that students must pay upfront and they are forced to pay it if they want to continue and complete their university degree. This is a disgrace. It should be immediately removed and this bill, which perpetuates this fee, should be rejected.

The issue we are debating in this bill is, in essence, whether or not students should be forced to pay a student services fee or a student representation fee. This battle has been waged now for almost two decades. For two decades, we on this side of the chamber have been arguing passionately that students should have the right and the responsibility to choose for themselves whether or not they want to pay for certain amenities, services and representation on campus. For two decades, the Labor Party on the other side of the chamber has been arguing vigorously that students must not have that choice but must be compelled to pay an upfront fee as a condition of doing their studies. This bill before us perpetuates Labor’s desire to cement compulsory student unionism into the university landscape across Australia. Not only that, but this bill now allows the student services and amenities fee to go up to $263.

We have the immigration system in tatters. We have preschools closing and childcare fees skyrocketing and becoming unaffordable. But this government does not address those things. It uses a full morning of parliament to introduce a measure to raise compulsory fees from $250 to $263. So important is that extra $13 that they want out of every single university student across the country that this becomes a priority of today’s morning session of parliament. Apparently, jobs can wait. Apparently, cost of living pressures can wait. Apparently, the boats can keep arriving—but jeez, we have got to get that 13 bucks out of those students. We cannot wait another 12 months for that $13 per student to automatically come into being.

We are so opposed to compulsory student unionism for the simple reason that we believe that students themselves should have the choice of whether or not they want to pay for student services and for student representation. It is a pretty simple proposition. University students are all adults. They are all above 18 years of age. They all have the maturity and the wisdom to decide for themselves which university to go to, what courses they want to study and how hard they want to study—or whether they want to study at all. They are adults, and they have that right and that responsibility. The Labor Party, and this Labor government, is happy for them to have those choices—but no, no, no, they are not allowed to have the choice of whether or not to pay for an event which is being held on campus. They do not have the right to determine whether or not they want to subsidise the catering which they may not use. They do not have the right, and apparently they do not have the capacity or the responsibility, to determine whether or not they want any form of representation on campus. This is insulting to the one and a half million students who attend tertiary institutions. On this side of the House we firmly believe that students should have that choice, and that is the reason why we are so strongly against compulsory student unionism. They should be able to decide for themselves what they want to spend their money on.

This principle is so important in the context of the changing demographics at our universities. The ‘member for Paradise’ made the point that students these days are working hard. Many are part-time students and so they are not hanging around on campus as they might have done 20 or 30 years ago. Nearly all students these days have part-time jobs to get through university. We know that 130,000 students are external students and so never set foot on a university campus. They never have the opportunity to avail themselves of the services and amenities which this compulsory levy would provide but they also have to pay an upfront fee. How does that work? They do not set foot on the campus because they are studying externally, and yet the government forces these students to pay a compulsory levy for services which they will never benefit from. This government needs to answer these fundamental questions because they go to the heart of this bill and to the heart of compulsory student unionism, which this government reintroduced six years after student unionism was made voluntary.

Like the member for Townsville, I have had many people make representations to me—dozens of students who are outraged at the fact that they have to pay a compulsory fee when they do not use those services. Let me read out comments from two or three such people. David Jancik, for example, who lives in Ferntree Gully in my electorate, writes:

That is this year. He attends Monash University.

Stephen, who is from Rowville, writes:

My daughter went beserk when she got hers… She doesn’t use the services AND she is doing honours and only needs to be at Uni for a few weeks this year had to pay a full Semester in ‘amenity’ fees…. She is Not Happy….

Frankie, another student from my electorate, says:

$55 per trimester and as a part-time post-grad student and I will be using zero of their services as the majority of my tuition is online or out of standard business hours (i.e. when they’re closed).

There are tens, if not hundreds of thousands of people who are in exactly the same position. They are barely on the University campus or they are only on the university campus to attend their tutorials or lectures and then go home to attend to their children, or study, or attend sporting clubs elsewhere. Yet this government is forcing them to pay fees for services they do not want.

Often the argument in favour of a compulsory fee is that it pays for essential services which more needy students need to complete their university degrees. I do not deny the fact that some essential services are necessary, but I put to you that those essential services which students and younger people generally need—particularly those who are more disadvantaged—are not the services provided by the university campuses but, often, the services provided by governments or NGOs. It might be Centrelink, for example; it might be Legal Aid; it might be Lifeline; it might be the Salvos, if the students are in particular financial trouble, or Anglicare. These are services that exist already. They already paid for by the taxpayer. They are already funded by the government or by donations collected by the Salvation Army or Anglicare.  I think that argument, which is frequently put forward, is a furphy.

The final simple point I would make in relation to this bill and in relation to the issue of compulsory student unionism is this: when you have services which are run by individuals, businesses or companies that have to deliver to their customers in order to attract revenue, then those services will be much more responsive to the needs of their customers than the services would be if they were guaranteed its funding through a compulsory levy. That is a very simple proposition and it goes to the heart of what we on this side of the House believe about fundamental liberal economics and the fundamental value of the free market. You get more responsiveness to students or to any other customers when a free market is at play, when businesses have to compete, when they have to deeply understand what the students want and what they need and tailor their services accordingly. You get far better responsiveness and far better tailoring to what students actually want and need than if those businesses or universities are simply given a bucket of money. Because that bucket of money has been collected on a compulsory basis, those services can become lazy and less responsive to student demand over time.

This bill is an important one. It is important not just because of the issues which we have been discussing and what this bill entails in regard to perpetuating compulsory student unionism. It is also important because it stands as a clear illustration of the stark philosophical divide between the coalition on this side of the House and the Labor Party on the other side of the House. We on this side of the House very much favour freedom of choice. We very strongly favour individual responsibility. We very strongly believe the free market delivers better outcomes to customers and students. They are our core philosophical beliefs and they are represented by our advocacy against compulsory student unionism. On the other side of the House, the contrast is that they favour compulsion. They have an innate mistrust of the market delivering for people. They do not favour giving students the individual responsibility and individual dignity to be able to make a choice of their own. This is an important bill. It is an important bill to be debated, but it is one that should be very firmly rejected. When we get back into government, hopefully at the next election, we will once again be abolishing compulsory student unionism.