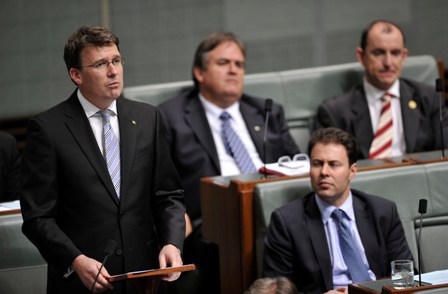 We asked for a delay last November in a motion put to this Parliament by Christopher Pyne, the Shadow Education spokesperson, and seconded by me. We then further moved an amendment to the Schools Assistance Bill in March, to ensure that non-government schools would be able to implement the national curriculum at the same time as government schools. We moved these motions and amendments not because we wanted to be obstructionist with regard to the government’s policies and plans, but simply because the national curriculum was not ready. Every single stakeholder knew this. The school principals did, the education authorities did, the teachers did, and the parents did. We could see as plain as day that the national curriculum was not ready. But of course the government did not see this and not only voted against our motion last November, but then also against our amendments in March.

not up to scratch, drowning in content, overlapping subjects such as science and geography and contains no agreement as to how it would be assessed.

The Australian Council of Deans of Science wrote to Minister Garrett asking him to delay the implementation of the science curriculum. The President of the Science Teachers’ Association, Anna Davis, said there needs to be another round of consultation which includes teachers, which was not included in the first round.
The Mathematical Association of New South Wales claimed the maths courses proposed for years 11 and 12 were too difficult for students with learning difficulties but too easy for those who were gifted students. The History Teachers Association had also written to the Minister expressing concern about the national curriculum—and I could go on.

So it comes as somewhat of a surprise, but also a welcome surprise, that this amendment is put to the parliament now.

Wyatt Roy: They have seen the light!

The national curriculum is not ready now and it may still take some time before it is ready. We suggest that the government not rush this process, that it takes its time and gets it right, unlike many other things which it rushes and gets wrong. This is a very important measure which they are trying to introduce. It has great impact across 10,000 schools across the country so we simply suggest that the government spends the time, does the work properly, consults with the appropriate groups and gets the national curriculum right before they try to introduce it.

I must say, I have never been enamoured with the concept of a national curriculum. I have always believed that we should have national consistency in our curriculum but not necessarily that we have to have exactly the same curriculum across every single school in the country. However, if we are going to proceed down this path then we need to get it right. I still have some serious concerns with the current draft as it exists at the moment. For example, there is little by way of an overarching framework or a clear direction for the curriculum as it stands. The curriculum has a heavy—

The DEPUTY SPEAKER ( Hon. Peter Slipper ): Order! It being 1:45 pm, the debate is interrupted in accordance with standing order 43. The debate may be resumed at a later hour, and at that time the honourable member for Aston will have leave to continue his remarks.

virtually absent from the national curriculum as it is currently conceived.

I think that is an area which needs to be re-examined, relooked at and incorporated into the national curriculum in terms of our overall British and Western heritage and our Judeo-Christian heritage, which we inherited, as well as Asian and Indigenous culture.

Some of the other concerns that we have raised are over the lack of appropriate resources which will be attached to the implementation of the national curriculum. There many other issues which Christopher Pyne, the Shadow Minister for Education, has raised.

We are moving two amendments to enhance the Schools Assistance Amendment Bill. The first is to ensure that schools are provided with appropriate support to implement the national curriculum. One of our criticisms has been that there has not been that support in the form of professional development training for teachers to implement the curriculum.

Let me conclude by saying that, like many things the government has touched, the national curriculum has involved delays, bungles and under delivery against the government’s rhetoric. This national curriculum was supposed to be finished and implemented by January 2011. Of course it has not been and now probably will not be implemented until 2013 or 2014. It was supposed to be a smooth process but it has not been anything of the sort. In fact, every single stakeholder group has, in some respect, complained about the drafts that have been presented and asked for significant changes.

Finally, it was supposed to have been delivered already according to the Prime Minister’s own words of July 2010 when she said:

This nation’s talked about national curriculum for 30 years. I delivered it.

She has not delivered it. It is nowhere near being delivered. It will be several years late from when she claimed she delivered it, but I suggest she takes that time and gets the national curriculum right because it will have a significant impact across all schools in our community. It needs to be properly thought through, properly considered and the government needs to get the content right.

As I have mentioned before in this House, we ideally should have bipartisan support, at least in relation to the broad framework of the national curriculum, so that schools in the future can have confidence that it will not be chopped and changed but, rather, there will be a consistent framework governing the curriculum going forward.