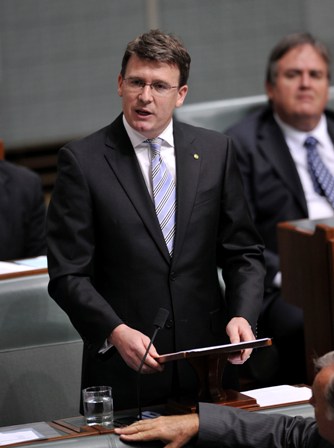 PARLIAMENT, CANBERRA:  I rise to speak on this motion which concerns early childhood education. I am the mover of this particular motion. This is an important motion that I hope will get the full support of this parliament. It is so important because it concerns the viability of three-year-old kindergartens in Victoria. In short, if we do not get the flexibility that is called for in this motion, then many three-year-old kindergartens in Victoria will close.

I would like to explain the origins of this pending crisis, how it is manifesting itself and the actions that we are proposing the government take to address the crisis. The crisis in three-year-old kinders and also four-year-old kinders in rural areas, had its origins a few years ago when the Federal Labor government decided that it wanted to get involved in preschool education. It introduced what is called the Universal Access Policy, which mandated that by 2013, every child in the year before they started school, which is typically four-year-olds, must have 15 hours per week of preschool education and further, that this preschool education must be delivered by university trained teachers. The government at the time made a commitment of $955 million over five years to assist with the implementation of this policy.

With the policy articulated, agreements were then struck with various state and territory governments to administer the universal access policy. However, while the sentiments expressed in the policy were reasonable ones—that is, to deliver good preschool education to preschoolers—the actual policy itself has not been properly thought through. Unfortunately, like many of this government’s policies, the full consequences of the implementation were not properly considered before the final decision was made. In this instance, the Universal Access Policy for four-year-olds is going to have a drastic impact on three-year-old kinder programs, particularly those in Victoria.

The second problem is insufficient staff. There is already a shortage of university-qualified staff for preschools, as you may already know, and with the four-year-old programs needing 50 per cent more staff by 2013, again three-year-old programs are going to find it very difficult to find staff to manage their programs.

Thirdly, the structure of 15 hours for four-year-olds will not necessarily fit neatly within the employment awards presently for kindergarten teachers, because under the Early Childhood Teachers and Assistants’ Awards, a full-time person will not be able to run two sessions of four-year-old kinders. This is because the Award specifies that they must have 30 minutes of non-teaching for every one hour of teaching and it also specifies a maximum of 38 hours per week. You can see, if you do the mathematics there, a single person will not be able to run two 15-hour sessions under the existing Award. So again, we are going create all sorts of staffing problems in the four-year-old programs as well as the three-year-old programs due to this.

Finally, the fourth problem which arises from the Universal Access Policy is that some four-year-old programs may be put in jeopardy in rural areas. That is simply because many kindergarten teachers will frequently run a program in one small kinder in one location and another one in another location and they simply will not be able to do both if the hours are increased, and so that puts some four-year-old programs also at risk and I imagine that Dan Tehan, the Member for Wannon, will have something to say about that as the seconder of this motion.

Kindergartens in my community have said that they will have to close their three-year-old programs if something does not happen to rectify these problems. Templeton Orchards Three-Year-Old Preschool in Wantirna in my electorate is one such example. Lelania Currie, the Vice-President of the kinder, has said publicly that they will have to close if this goes ahead by 2013. They presently cater for about 23 families each year. Other kinders have said similar things. They have said that if there is no flexibility then three-year-old kinders will simply have to shut their doors.

The Municipal Association of Victoria has said that there will be a crisis by 2013 under this policy. They have pointed out that four-year-old programs are already bursting at the seams due to a mini baby boom which is going on across Victoria, and indeed across Australia, and that this Universal Access Policy will exacerbate it. The Prime Minister herself has been advised that her electorate is one of the most at-risk regions for children to miss out. This will turn into a very significant crisis by 2013 and impact thousands of young families if this mess is not fixed up. The clock is ticking. We need to act and we need to act quickly.

Let me move on to what should be done to fix this. The first point I would make is that it is not too late. The policy under the current law is that it needs to be implemented by 2013. Kinders are starting to enrol already for that year and there is still some time, but we do not have a lot of time.

The second point I would make is that the key principle required is flexibility. This government has a tendency to want to mandate things from the top down and, in this instance, they have come down and mandated very heavily that every single four-year-old kinder program across the country must have 15 hours. What we are suggesting, through this motion, is that the government just allows some flexibility for the kindergartens to implement their policy at their own pace and according to their own infrastructure capacity and according to their own staffing that they have available.

So point 8 in the motion, which is the key point, calls on the government to provide flexibility for the kindergarten operators to deliver kindergarten services according to the needs of their own communities and in line with local infrastructure and staffing capacity and further, at the very least, provide flexibility on the start date for the implementation of the Universal Access Policy. It is a reasonably straightforward motion. It should be a reasonably straightforward thing for Minister Garrett to hopefully accept.

If flexibility is indeed provided and we can properly look at how we are going to implement this going forward, we also would be able to look at other things as well. There is a strong group called the Community Choice for Preschools Group which is calling for the 15 hours of funding to be spread across the two years: possibly five hours for three-year-olds and 10 hours for four-year-olds. I think that is a worthy idea that should be considered, but can only be done so if Minister Garrett is prepared to accept our motion to look at providing flexibilities for kinders so that they can implement things according to their own wishes.

Madame Deputy Speaker, I commend the motion to the House and I hope that it will receive support across the chamber.

CLICK HERE to read a copy of Alan’s motion