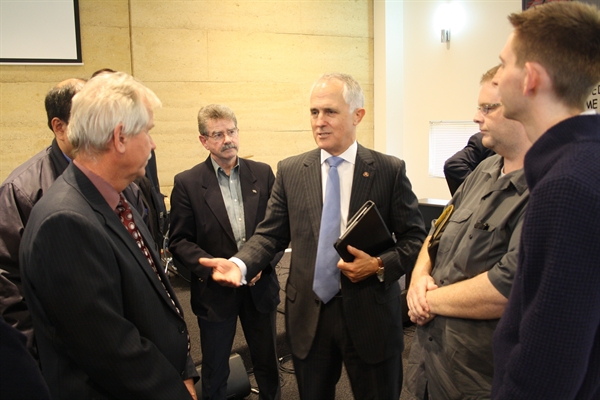 The state of Knox’s broadband were front and centre at a Broadband Forum with Coalition spokesman Malcolm Turnbull hosted by Federal Member for Aston Alan Tudge MP.  About 200 locals from across Knox attended the event to ask questions about the Coalition’s plan and express concerns over their current internet connection.

The rollout would occur at a fraction of the cost of the Government’s plan, it would be done more quickly and would be more affordable to residents.

Under the Government’s NBN plan, residents could be waiting a decade a more.  The vast majority of Knox, including all of Rowville and Lysterfield, is not listed to start installation in the next three years.

The current rollout of the NBN is 98% behind schedule.

Mr Turnbull responded to questions from Knox residents, particularly around the quality of services, the timing of upgrades under the NBN and the cost of broadband.

“Users will be able to download four streams of HD video at the same time on our minimum speed of 25 megabits per second.”

Mr Turnbull also spoke about the Coalition’s commitment to keeping broadband and telephone services affordable.  “The biggest barrier to internet access is not the technologythe biggest barrier is lack of money,” he said.  “Labor’s approach will make broadband more expensive – NBN Co is planning for average revenue per customer to treble by 2021.”

If the Government’s NBN price rises go ahead, broadband costs over the next ten years will rise twice as fast as electricity prices over the past decade.  The Coalition has calculated that broadband prices under the Coalition policy will be at least $300 a year cheaper than under Labor.

Mr Turnbull also responded to questions about the key details of the Coalition plan:

Mr Tudge said the forum was an important step in the campaign for better internet services across Knox.

“My Biggest Survey showed that this is a hot topic in Knox and the turnout and level of discussion showed that today.”

“Broadband Internet in many parts of Knox is substandard and needs to be fixed as soon as possible,” Mr Tudge said.

“Our area may not be on the radar for Labor’s NBN any time soon, but the Coalition policy will ensure every household and business in the area has access to broadband with download speeds of at least 25 megabits per second within the next three years.”