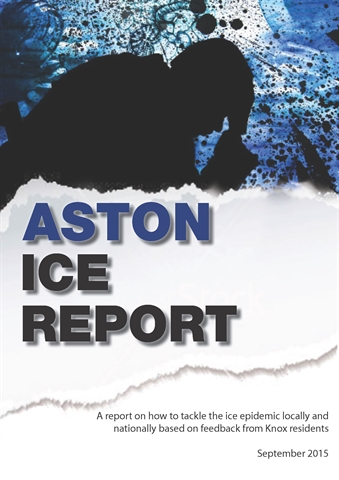 The Federal Member for Aston, the Hon Alan Tudge MP, has launched the Aston Ice Report on behalf of Knox residents outlining a plan of action for tackling the ice epidemic locally and nationally.

Following the Federal Government’s announcement of a National Ice Action Strategy, Mr Tudge asked for feedback and ideas from local residents in Knox about how to best tackle the ice epidemic.

Mr Tudge has received emails, calls, letters and posts on social media from hundreds of local residents. In addition, Mr Tudge held an Ice Public Forum in Rowville in mid-July 2015 attended by over 140 locals and including representatives from every police station in Knox, together with local social and health workers and the Federal Minister for Justice, Hon Michael Keenan MP.

“The Aston Ice Report is a community report summarising the feedback received and collectively it represents a plan of action for tackling the ice epidemic in Knox,” said Mr Tudge.

“Nationally, the number of ice users has doubled since 2010 and they are taking the drug more frequently.  Ice now causes more deaths on our roads than alcohol,” said Mr Tudge.

“The number of ice offences in Knox has increased 13 fold in the last five years.

“More than one in five drug offences in Knox are now due to ice.

“This is a national epidemic which we must get on top of.

“Tackling ice will be most effective if it is a community effort. We can tackle ice if we work together across governments, community groups, schools and families with a coordinated approach.

“My ambition is that this Aston Ice Report can go some way to helping shape the national and local response to the ice epidemic,” said Mr Tudge.