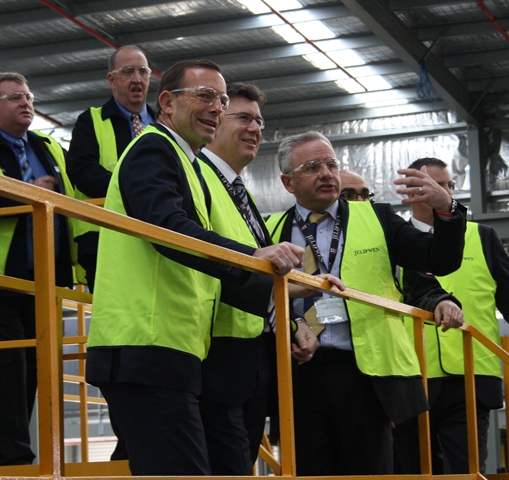 Federal Leader of the Opposition the Hon Tony Abbott MHR joined local Federal Member for Aston Alan Tudge MP today to visit Jeldwen in Rowville to discuss the sky rocketing costs for local businesses due to the Carbon Tax and the increase in government red tape.

Jeldwen is one of the biggest manufacturers in Knox with its Rowville plant being the largest Jeldwen site in the nation employing hundreds of locals.

Mr Abbott and Mr Tudge examined the new glass manufacturing facility and had meetings with the senior executives, including Senior Vice President Adrian Tate, to discuss what could be done to help local manufacturers struggling to compete in Australia.

Top of the list was the need to abolish the carbon tax which just makes manufacturing in Australia more expensive. For Jeldwen alone, the cost of the tax was over $330,000.

A new house built in the area is $5,000 more expensive due to the carbon tax according to the Housing Industry Association, that was also present.

“Jeldwen spends over $3 million a year on power costs and we’re looking at a $330,000 impost to that as a result of the Carbon Tax over the last 18 months, ” Mr Tate said.

“We need to compete on a level playing field which we haven’t currently got,” he said.

“I want to work hard to ensure good local manufacturers like this one continue,” Mr Abbott said.

“The Government is making it harder and harder for businesses to invest in Australia as a result of the Carbon Tax and constant increases in red tape.”

“The Coalitions plan for Australian manufacturing starts with the immediate abolition of the Carbon Tax and continues with a program of red tape reduction.”

“We have great workers, we have great business, we have tremendous innovators in this country, we can take on the best in the world but we’ve got to give our businesses a level playing field,” he said.

“Knox is one of the great manufacturing regions in Australia,” Mr Tudge said, “But many are doing it particular tough and the Labor government is just making it harder with its higher taxes and more red tape.”

“We can remain a great manufacturing region, but Government has to support local business like Jeldwen, not hinder them.”

“Our plan to abolish the Carbon Tax, deal with militant unions and cut red tape will really help local manufacturers,” he said.