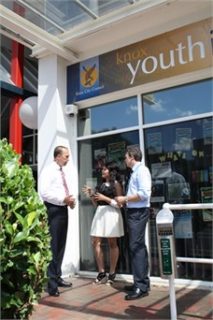 Mr Tudge was keen to show Mr Dutton, the proposed new site for the centre, which is still vacant.

Mr Dutton & Mr Tudge were accompanied by Prerna Diksha. Ms Diksha was the Chief Petitioner for a Headspace centre in Knox. The petition, which was tabled in the Parliament last year, received enormous support from the community with over 10,000 signatures collected.

Mr Dutton expressed his full support for the campaign for a Headspace site at Knox. In particular, he noted how ideal the Knox City Ozone precinct site is specifically because of its central location, as a hub for young people, and also because of its excellent access to public transport, which many young people rely upon.

Mr Tudge was delighted to receive the Shadow Minister’s full support for the campaign. ends