Residents have their say at local Roads & Infrastructure Forum 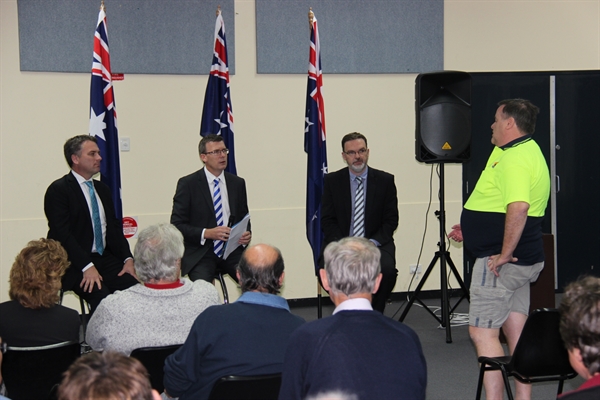 The Federal Member for Aston, the Hon Alan Tudge MP, hosted the Assistant Infrastructure Minister and the RACV at a local Roads & Infrastructure Forum yesterday to discuss community concerns and infrastructure priorities.

The Rowville rail project was raised by many locals, with Mr Tudge outlining his strong views on the project.

“If there was one local project I wish could be completed overnight, it would be the Rowville Rail,” said Mr Tudge.

The recent dumping of the East West Link by the Andrews Labor Government was another key issue, with Mr Tudge telling the audience it must be built.

“Why pay hundreds of millions of dollars to not build a road?” said Mr Tudge.

“Labor has sold out the eastern suburbs, trashed Victoria’s reputation and cost 7,000 jobs… and for what?”

“The federal government maintains its commitment to providing funds to build the East West Link project.”

Mr Tudge said the feedback provided at the forums was invaluable.

“It was terrific to hear from so many local residents about issues that matter to them,” said Mr Tudge.

Minister Briggs and Dave Jones welcomed the opportunity to hear a range of views from the community about the issues discussed.