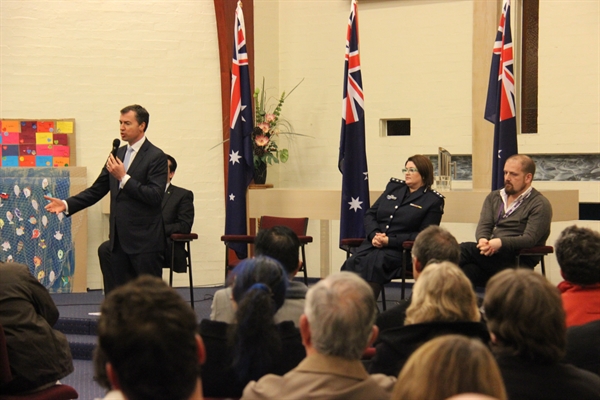 The Federal Member for Aston, Hon Alan Tudge MP, said that ideas from the local Ice Public Forum held in Rowville last night will contribute to government policy in the months ahead.

The Forum, attended by over 140 local residents, was organised by Mr Tudge and included a panel consisting of the Federal Minister for Justice, Hon Michael Keenan MP, Knox Police Local Area Commander Inspector Therese Fitzgerald, and Tom Stylli, Team Leader at EACH Social and Community Health.

The panel took a variety of questions and comments from residents on topics including prevention, tackling supply and demand of the drug, increasing funding for services and police, and tough penalties for ice dealers.

Increased focus on education was a key recommendation from many residents who emphasised proper programs in schools were needed to teach kids about the dangers of drugs.

“Education is vital. You have to focus on younger people,” said one resident.

Minister Keenan outlined the new advertising campaign currently on TV and online that highlighted the dramatic effects of ice use, including domestic violence and family breakdowns.

“We need to show the damage ice is doing to people, to communities and to families,” said Minister Keenan.

Rehabilitation services were a priority for many residents who stated they found it hard to find appropriate, timely care for family members.

Some residents told personal stories of family members affected by ice.  The panel outlined the many service providers who were present at the forum and encouraged stronger communication between the community and services available.

Mr Tudge will be preparing a formal ‘Aston Ice Report’ to be presented to the government based on the views provided at the forum and from feedback received through calls, letters, emails and social media.

“This is a national epidemic which we must get on top of,” said Mr Tudge.

“The views of local people will be put together in a report to the Minister and help shape the government’s response over the months’ ahead.”

To make a suggestion or put your views forward about the ice epidemic, contact Mr Tudge on alan.tudge.mp@aph.gov.au or call his office on 9887 3890.