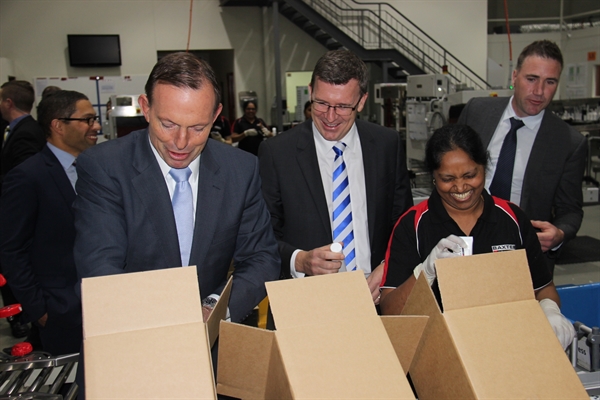 Baxter Laboratories began operations in 1994 and has grown to manufacture over 50 products which are supplied into 5,500 community pharmacies as well as 3,200 grocery outlets in Australia.

Over one million units are exported each year, including throughout Asia, Europe and the USA.  Baxter employs over 100 staff, many from Knox.

The Prime Minister and Mr Tudge outlined how Baxter Laboratories, together with many other local manufacturers, will directly benefit from recently announced Free Trade Agreements (FTAs) with China, Japan and Korea.

“It is something that I really want to see grow and expand in the months and years ahead.”

Mr Tudge emphasised the benefits of the FTAs to Knox manufacturers including Baxter Laboratories.

“They have the chance now to do even better because of the free trade agreements which will enable them to export even more into China and into Korea, into Japan and elsewhere,” said Mr Tudge.

The Prime Minister and Mr Tudge also emphasised the devastating impact the Victorian Labor Government’s decision not to build East West Link will have in Knox.

“It was a particularly bad day for the Eastern Suburbs and South Eastern suburbs because we rely on the Eastern Freeway and the Monash Freeway so much every single day,” said Mr Tudge.

“Victorians should not forget this disgraceful decision which Daniel Andrews made yesterday to throw $640 million on the scrap heap to not build a road,” said Mr Tudge.

“They spent $640 million of taxpayers’ money to destroy jobs. That’s what the Victorian Government did yesterday. It’s wrong-headed, it’s short-sighted, it’s catastrophic for the future of Melbourne and Victoria,” said Prime Minister Abbott.

“My pledge to the people of Melbourne and Victoria is that the $3 billion that the Commonwealth had pledged to East West Link will remain in a locked box for the first Victorian Government that is prepared to build this absolutely necessary piece of infrastructure,” said Prime Minister Abbott.