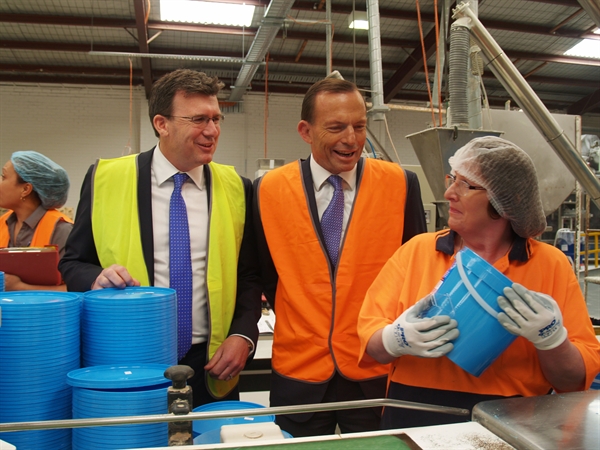 Prime Minister, the Hon Tony Abbott MP, today made local Knox business Loral Ipsum his first stop on his first visit to Victoria since being sworn in one week ago.

The Prime Minister, along with Federal Member for Aston and Parliamentary Secretary to the Prime Minister the Hon Alan Tudge MP, visited Loral Ipsum to discuss the positive impact scrapping the Carbon Tax and lowering the Company Tax rate will have on the manufacturer. Loral Ipsum produces a range of household cleaning and gardening products. The local business experienced an almost 10% increase in their electricity bill as a direct result of the Carbon Tax.

The Prime Minister said that the new Government was calmly and methodically implementing policies which will directly help the people of Knox such as building the East West Link, abolishing the Carbon Tax, reducing red tape for business and lowering company tax.

“We’re not rushing things but we are getting things done and very soon people will start to notice more and more differences thanks to the work of this Government,” Mr Abbott said.

“In particular we are moving swiftly to abolish the Carbon Tax, to get the Budget back under control, to stop the boats and to build the roads of the 21st Century.”

“All this is good news for the businesses, workers and families of outer Melbourne who will be at the heart of the new government’s concerns,” he said.

Mr Tudge said the Prime Minister’s visit showed the importance of the Knox area to the new Government.

“It’s tremendous to have the new PM back in Knox so quickly after being sworn in.”

“Local businesses are telling me that there has already been an increase in confidence in the weeks since the election.”

“An increase in business confidence is good for jobs and good for our local economy.”