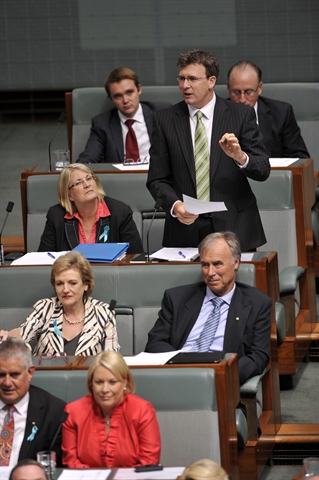 Federal Member for Aston Alan Tudge MP has put his support behind a campaign for new funding for a much needed upgrade to Boronia Heights Primary in a speech to Federal Parliament last night.

In his speech, he noted that Boronia Heights Primary School, which caters for 500 students, was established in 1967 and many of the buildings from that time are still on site today.

In 2011 the school topped the list of schools in Victoria requiring maintenance.

Mr Tudge said that parents at the school had been campaigning for new facilities for some time now, including collecting over 500 letters from concerned parents in support of building upgrades.

He noted that tragedy of the missed opportunity from the federal Building the Education Revolution (BER) funding.  Had it been administered in the same way as the Investing in Our Schools funding which the Howard government provided in 2005-06, they could have build twice as much.

“This is a fantastic school that gets good results however it is in need of a significant building upgrade,” Mr Tudge said.

“It has been 45 years since this school’s inception. The buildings have served it well but it is time for renewal and to put the school on a new trajectory.”

“Council President Christine Ruff and School Principal Mark Flack has the overwhelming support of the entire school community in their campaign for this upgrade.”

“Over 500 parents and concern residents have written letters in support of this campaign.”

“The current buildings have served the school well but it is now time for a renewal to put the school on a new trajectory.”