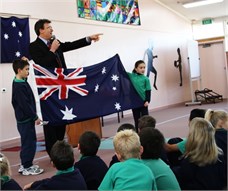 Mr Tudge described Australia’s flag as our nation’s most significant symbol. He said, “Our Australian flag is officially 110 years old today. It is flown as a statement of pride of Australia as a free and democratic society that is proud of his history and confident of its future.”

Presenting a new flag at a school assembly, Mr Tudge explained the three elements of the Australian flag: the Union Jack, the Federation Star and the Southern Cross.
Mr Tudge said, “The Union Jack in the upper left corner of the flag acknowledges the history of British settlement and the institutions that we inherited. It tells us where we have come from. The Federation star has seven points which represent the six states and two territories and tells us what we are – a federation. Finally the constellation of five stars known as the Southern Cross tells us where we are geographically – in the southern part of the world. Together, these three symbols represent the greatest country in the world!”