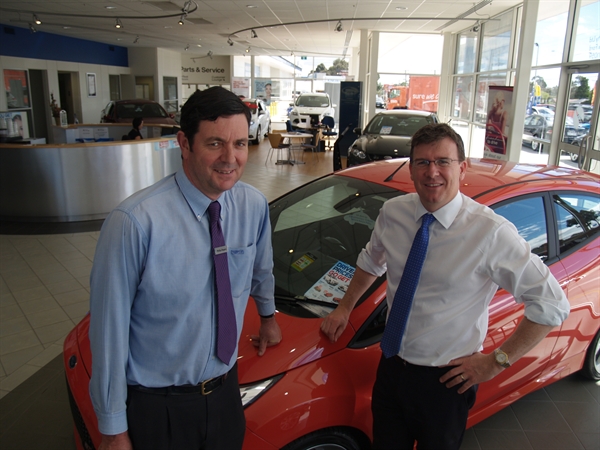 Local car dealers, including Knox Ford, Jeep, Dodge and Chrystler, have experienced an estimated 30% boost in car sales over the last two weekends as a result of the changes to Fringe Benefits Tax (FBT) arrangements being reversed by the new Coalition Government.

Labor’s changes eliminated the FBT statutory formula method, causing an immediate drop in sales.  Over $1.8 billion was taken out of the car industry.

Federal Member for Aston Alan Tudge MP was a vocal opponent of the changes and joined together with such groups as ‘Who’s Next’ to oppose and highlight the impact they would have.

“The FBT changes should never have occurred in the first place.  They hurt local businesses, charities and families.”  Mr Tudge said.

“With the reversal of these changes, we have seen an instant impact on sales and on jobs.”

Phillip Rogers, Fleet Sales Manager at Knox Ford, said the impact of the reversal has had a direct impact on the sale of new cars at the dealership.

“We saw enquiries for new car sales drop from 40 a week to just 5 after these changes were announced in July,” Mr Rogers said.

“We’ve now seen an immediate 30% increase in sales as a result of these changes being reversed which is having a significant impact to our local business,” he said.