Knox stops to remember our ANZACs 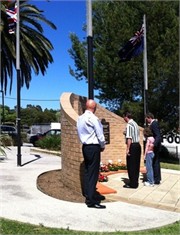 ANZAC Day is the most sacred day in our national life.

Residents across Knox stopped to commemorate our local heroes today in ANZAC day services across the community. We were remembering those who have served and those who continue to serve our country in wars, conflicts and peacekeeping operations.

It is now 98 years on from the landing of Australian and New Zealand troops on the beaches of Gallipoli. Hundreds took the time to reflect on their meaning of service and sacrifice at many dawn services including at Bayswater and Boronia.

More than one million Australians have served our country in our defence forces with almost 100,000 having made ultimate sacrifice for our nation.

Federal Member for Aston Alan Tudge MP said Anzac Day was Australia’s annual opportunity to give thanks for those who served, and continue to serve, their nation.

“Anzac Day is our nation’s day of thanks for all those who have worn, and who wear today, our nation’s uniform.”

“It is a day for us to remember and give thanks to all the women and men who have served this nation in times of war and peace, who have fought and defended our way of life, values and freedom.”

“For Knox ANZAC day is a chance to remember our local heroes past and present.”

“I was proud to be part of local ANZAC events including the dawn service at Boronia RSL.”