Knox Relay for life raises over $70,000 for Cancer Council 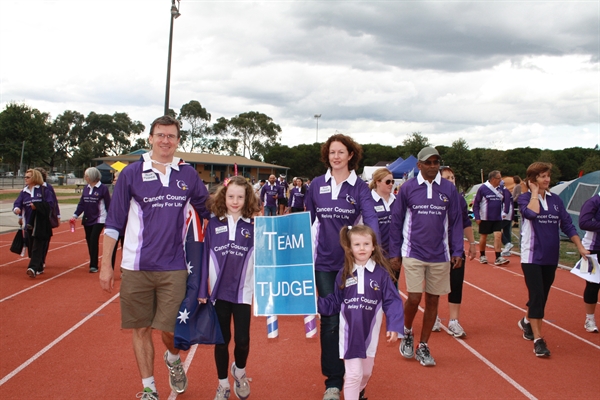 The Knox Relay for Life, held at the Knox Athletics track over the weekend, has been an enormous success with over $70,000 raised in support of the Victorian Cancer Council.

The relay involved teams involved will complete an 18 hour run, jog or walking. Over 300 people from dozens of teams took part in the relay over the weekend. Local businesses, sporting clubs and community groups formed teams to take part in the relay. The relay is a chance to raise money, honour those who are carers for people with cancer, celebrate those who have beaten cancer and remember those who have passed away.

Federal Member for Aston and Relay Patron Alan Tudge MP said the relay was a spectacular success and showcased the strong community spirit that exists in Knox.

“It was great to see hundreds of locals join together to raise money for a good cause,” said Mr Tudge.

“With over 700 people in Knox diagnosed with a malignant cancer every year this event is of special significance for a large number in our community.”

“There was a strong sense of community and generosity on the night and in the lead up to the event as shown by the over $70,000 raised.”

“It was great to be a part of the relay, walking in shifts all throughout the night all for a good cause!”

“Well done to Amy Hillier and the organising committee for organising such a fantastic event.”

“I’m sure with increased community support that next year’s event can be even bigger and better.”