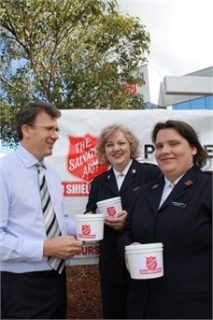 Major Merv Lincoln, Commanding Officer of the Ferntree Gully Corps of the Salvation Army, and Alan Tudge MP, Federal Member of Aston and Chairman of the Knox Red Shield Appeal, spoke at the launch.

Mr Tudge said, “Each week, The Salvation Army provide 160,000 meals, 12,000 food vouchers, 3,000 beds for the homeless and 500 blankets. This is an enormous task only made possible with the help and support of local people who give their time as volunteers doorknocking in their local area.

Lieutenant Sarah Eldridge and Cadet Judy Shaw, from the Rowville Branch of the Salvation Army, were available to speak to people about the Knox Red Shield Appeal efforts.

The Salvation Army Community Band played music and balloons were handed out to children to promote the Knox Red Shield Appeal.

10,000 more Australians will be able to take advantage of the First Home Loan Deposit Scheme from July 1.
30 June 2020