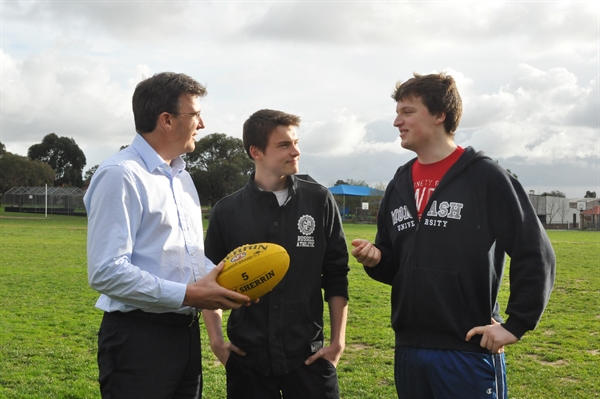 The Federal Member for Aston, the Hon Alan Tudge MP, said he was delighted that three students from Knox were today named as winners of the Australian Student Prize.

Michelle Steele from Wantirna South, Stephen Terrington from Knoxfield and Sorin Zota from Ferntree Gully were some of the top 500 senior secondary school students across the country to have taken home prizes valued at $2,000 each.

The Australian Student Prize recognises academic excellence and achievement of students in senior secondary years, with this year’s winners being rewarded for their work during the 2013 school year.

Mr Tudge said he was proud that Knox was home to such exceptional students.

“These awards recognise the hard work of these three Knox students and it shows the strength of our schools that we have three of the top 500 students in Knox,” Mr Tudge said.

“Congratulations to Michelle, Stephen and Sorin.”

“If our young people are to compete and succeed in the globalised new jobs economy we need to ensure they have the best education possible,” Mr Pyne said.

“These awards are particularly important as they recognise students who work hard and perform at their very best at a time when they are making crucial decisions about their next move into the workforce or further study.

“This Government is backing our students with more funding for schools and by spreading the opportunity of a higher education to more students across Australia.”

This year, prize winners include 23 students who won medals as part of Australia’s team in the International Mathematics and Informatics and Science Olympiads, as well as 29 graduates of the International Baccalaureate Diploma Program who achieved the programme’s highest score of 45.

Nominees for the Australian Student Prize are put forward by state and territory curriculum, assessment and certification authorities.

Allocation of prizes between the states and territories is calculated on their relative share of the Year 12 population, based on enrolment data from the previous year.

The Australian Student Prize has been awarded nationally since 1991.

A list of 2013 Australian Student Prize Winners is available at: http://education.gov.au/australian-student-prize.