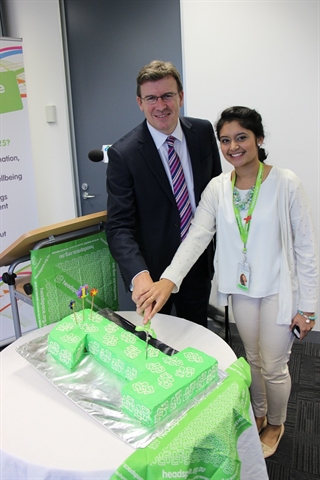 The Federal Member for Aston, the Hon Alan Tudge MP, today celebrated the first birthday of the Headspace Centre in Knox Ozone.

Twelve months ago, the Centre opened after a two year campaign led by Mr Tudge that saw 10,000 signatures collected, calling for its establishment in the popular Knox Ozone precinct.

Speaking at the celebrations today, Mr Tudge said it was no surprise that the Centre had been so heavily utilised by local young people.

“I said when Knox Headspace opened that if just one Knox young person’s life is changed for the better, it will have been worth it.

“Twelve months later, almost 1,000 young people have benefited from the range of services offered by Headspace. The Centre is changing lives every single day.

“This shows how desperately needed the Centre was for Knox young people, and the dedication of Headspace staff in Knox,” said Mr Tudge.

“I congratulate the Headspace team on their hard work and I will always support the work that they do in helping our most vulnerable young people,” said Mr Tudge.