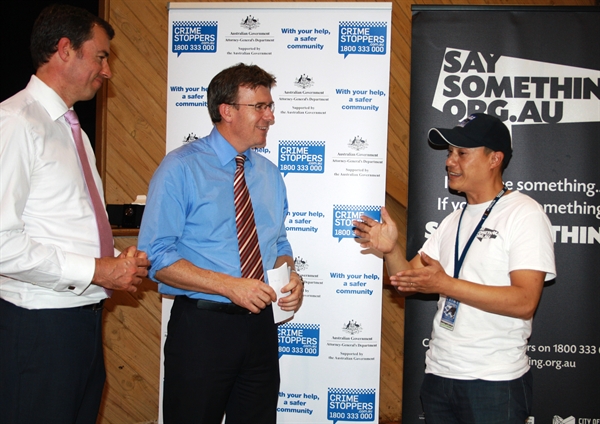 Hot topics at the forum included the rise in ‘hoons’ on local residential streets, anti-social behaviour around local shopping centres such as Knox Ozone, drug use and the safety of Boronia and Bayswater train stations. There was also strong concerns expressed by residents about the underlying culture of crime and anti-social behaviour growing amongst youth and young adults.

The forum comes as crime is on the rise in Knox. Recent Police Crime statistics have shown a 15% rise in overall crime in the local area. This figure includes a 21% increase in robberies and 19% increase in assaults.

Mr Tudge’s recent Biggest Survey also showed that 1 in 10 respondents do not feel safe in their local area and 67% supported initiatives such as installing CCTV cameras in local shopping centres.

Mr Wakeling said that while much work on the issue of community safety and crime had been done on a state level, there was still more work to be achieved.

“We have made huge strides in fixing up legislation and loopholes for serious violent offenders,” Mr Wakeling said.

“We have particularly made the punishments for hoon drivers harsher, with fines of up to $5,000, loss of license for up to 6 months and crushing a driver’s car for repeat offenders,” he said.

Mr Keenan said it was important that communities were supported in their efforts to reduce local crime.

“We are committed to reintroducing the ‘Safer Streets’ program which will provide important funding for CCTV cameras and other initiatives,” Mr Keenan said.

“Community Safety and the rise in crime is of growing concern a vast number of Knox locals,” Mr Tudge said.

“There are already many initiatives underway which are making a real difference, including the CCTV cameras at Boronia and Protective Safety Officers at local railway stations.”

“However there is more to be done, as was apparent from the forum.”

“The biggest issue raised at the forum was how to change the culture to be more respectful.  There are some things that political leaders can do to impact this, but it involves an effort from the entire community.”

“One key message also from the forum was that locals must ensure they report crimes to police or to crime stoppers,” he said.