Health funding cut back flip a win for Knox patients 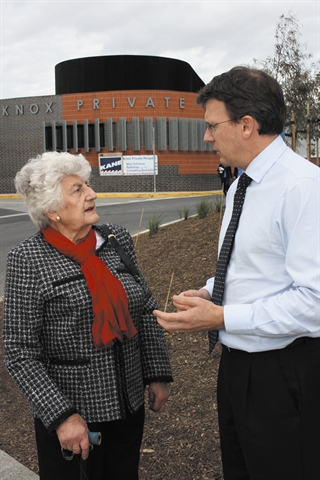 Federal Member for Aston Alan Tudge MP has welcomed the Federal Government decision to restore the $107 million funding it cut from the Victorian healthcare system.

The cuts, which included an $8.4 million cut to local health provider Eastern Health, had forced beds to close at local Knox facilities: the Angliss Hospital and Wantirna Health.

Mr Tudge has led a local community campaign against the cuts, including numerous speeches in Parliament and organising a local petition.  Last week in Question Time, Mr Tudge directly questioned the Prime Minister over the cuts and sought to table the statement from Eastern Health.

He had planned a protest rally for this Saturday.

Mr Tudge said the decision to abandon this year’s funding cuts was welcomed.

“It should not have taken such a large community and national campaign to get this decision.

“How was it ever a good idea to cut funding for local hospital beds, while continuing to waste money elsewhere?

“I will be watching carefully to ensure that money is actually returned to Wantirna Health and the Angliss Hospital.

“The issue is still not over. We now need a commitment that they will not cut the funding next year.”