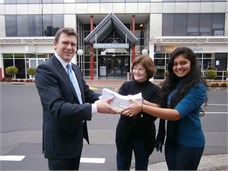 A Headspace Centre will be soon be opening in the old Centrelink building at Knox Ozone.

This was confirmed today by the Federal Government and is the culmination of a 15 month campaign spearheaded by Federal Member for Aston, Alan Tudge MP.

Mr Tudge said he was ecstatic with the decision.

“I am very excited about this. It is the culmination of a year-long campaign which included a 10,000 strong petition and the raising of $10,000 in charitable donations.

“Thousands of people in our local community have got behind our efforts and made this a reality.

“I particularly acknowledge and thank Prerna Diksha and Pauline Renzow, the co-petitioners, who have fought tirelessly for this Centre and bravely spoken about tragedies in their own families.

“The Headspace Centre will assist thousands of young people who need somewhere else to turn.

“Depression and severe anxiety can have a devastating impact and I know this will new Centre will make a real difference.

“Any young person who needs support, advice or just someone to talk to, can walk into a Headspace centre and be treated with respect and compassion.  The aim is that every young person can have a life where they are hopeful and positive about the future”.

Mr Tudge launched the Knox Headspace Campaign on February 18 last year and gained initial public support at a large public forum he convened.  The campaign included establishing a Youth Mental Health Committee, collecting and tabling a 10,000 signature petition, lobbying the Knox Council to support the effort, bringing other health providers on side, making speeches in parliament, and raising $10,000 in donations to help seed its establishment.