First section of Bus Lane gone. Now for the rest. 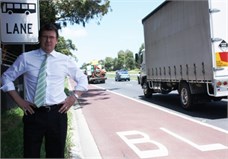 Federal Member for Aston, Alan Tudge MP, has welcomed the removal of the Stud Road Bus Lane, between Ferntree Gully Road and Kelletts Road, following 12 months of campaigning on the issue.

Mr Tudge has been one of the leaders in fighting for the bus lane to be scrapped.

Mr Tudge said, “This is a victory for commonsense. It is great news for local people who travel long this part of Stud Road. Importantly it removes the most dangerous section of the bus lane and will ease motorist frustration.”

“I have been campaigning to scrap the bus lane for over a year. It has been one of my top priorities. I am absolutely delighted on this outcome.”

“I will now continue to fight to have the rest of the Stud Road bus lane scrapped, or at the very least, fully reviewed. While the section between Kelletts Road Ferntree Gully Road was the most dangerous, there are other sections which are also dangerous and unnecessary.”

“The bus lane suffers from what experts call ‘Empty Lane Syndrome’ since only 6-7 buses travel along it per hour, even at peak times, while thousands of cars travel along the other lanes.”

“Transport experts recommend that at least 17 full buses per hour are required to justify a dedicated lane. At present, only 6 to 7 partially filled buses travel along it per hour. A dedicated lane is simply not justified. Other options should be explored such as providing buses with traffic signal priority, rather than dedicated bus lanes.”

Mr Tudge released a report in November last year, highlighting the fact that an overwhelming 90 per cent of the hundreds of local residents who had contacted him directly, had asked that the bus lane be removed or amended.

“They said it was unnecessary, dangerous and adding to congestion,” Mr Tudge said. “But many people also had very constructive suggestions as to how to fix it.”

Mr Tudge said that the removal of this first section of the bus lane was a wonderful outcome.