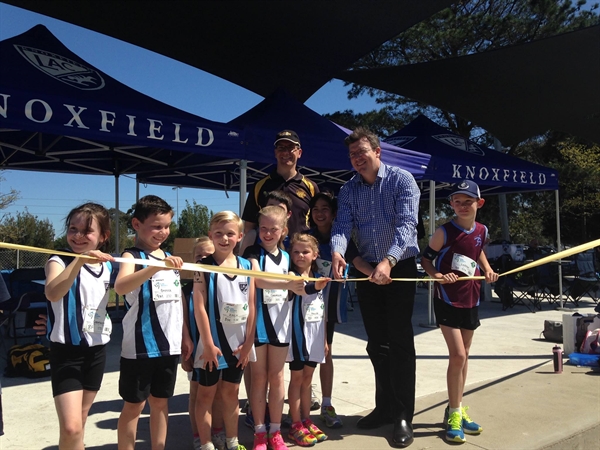 The Federal Member for Aston, Hon Alan Tudge MP, has officially opened the first of the election commitment capital projects to be funded, contracted and now built.

Mr Tudge was honoured to officially cut the ribbon at the Knox Athletics Track in Knoxfield on Saturday morning at the start of the Little Aths season.

During the last election, Mr Tudge made a number of commitments that, should the Coalition win government, $1.5 million would be spent to upgrade 12 different local sport facilities.

Knox Athletics Track received $40,000 for new concrete terracing works, extending the viewing area under the shade sail in a targeted upgrade to boost spectator amenity at the track.

“This is one of my first election commitments to be funded, contracted and now built,” said Mr Tudge.

“It makes the Knox Athletics Centre an even better facility for the hundreds of kids and parents who use it every week.”

“I strongly support better sporting facilities for the Knox region because it not only keeps people fit and active, but keeps kids busy and off the street.”

“Over the next two years, further projects will be rolled out,” said Mr Tudge.