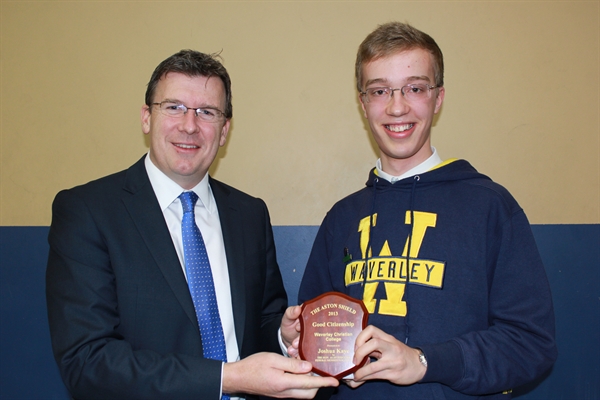 Local Waverly Christian College student Joshua Kaye has been the first student to receive an Aston Shield for 2013.

Joshua has been a school House Captain involved in house drama, swimming, debating and the college production. He exemplifies an Aston Shield recipient. One of his most significant contributions to the College has been his ability to motivate and challenge the student body. He has led the Make Poverty History and 40 Hour Famine campaigns encourage students to get involved donate to these worthy causes.

Over the coming weeks the Hon Alan Tudge MP, Federal Member for Aston and Parliamentary Secretary to the Prime Minister, will be presenting Aston Shield awards to students across Knox at end of year assemblies and presentation evenings. The Aston Shield is given to outstanding students who are role models for the rest of their school.

The award is named in honour of Tilly Aston, an inspiring woman who worked tirelessly for the rights of blind people. The Federal Electorate of Aston, which covers most of Knox, is also named after Ms Aston.

“Congratulations to Joshua on what is a very deserving recognition of achievement, excellent attitude and a positive contribution to the school community over a number of years,” Mr Tudge said.

“I look forward to continuing to present Aston Shields across Knox schools and awarding some very deserving students,” he said.