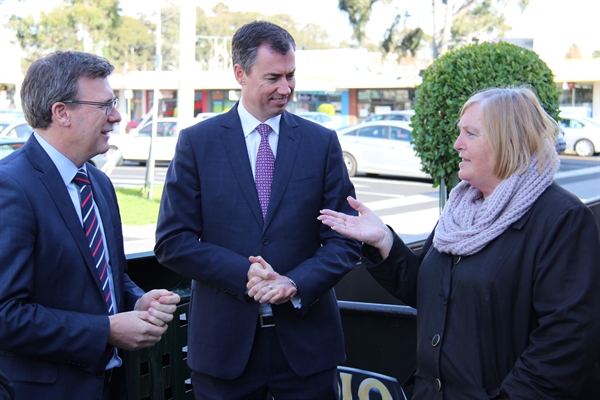 The funding has been committed under the Coalition’s $40 million Safer Communities Fund.

The election commitment for new security cameras at Scoresby Village is part of Mr Tudge’s plan to deliver a safer Knox.

“The new cameras are absolutely necessary to help provide a safer community for shoppers and traders at Scoresby Village,” said Mr Tudge.

“The new security cameras will complement the recently completed new lights at Scoresby Village to boost trader and customer safety and amenity.

“The new lights were a key 2013 election commitment of mine which has been funded and delivered.”

“I look forward to working with the local traders to deliver these security cameras as soon as possible.”

The Safer Communities Fund delivers on the Coalition’s ongoing commitment to keep Australians safe and secure.

Only safe communities can be strong and prosperous and the best way to tackle crime and anti-social behaviour is to prevent it happening.

The $40 million Safer Communities Fund will consist of two streams:

 Stream one will boost the efforts of identified local governments and community organisations to address crime and anti-social behaviour by funding crime prevention initiatives (such as fixed and mobile CCTV and lighting).

 Stream two will boost efforts to protect schools, pre-schools and community organisations that are facing security risks associated with racial or religious intolerance.

This new $40 million fund will build on the previous work the Coalition undertook during Government through Safer Streets Programme and the Schools Security Programme.

“We will continue to put funds towards projects that make our streets, communities and our nation safer.” Mr Keenan said.