Coalition committed to taking the pressure off Knox Households 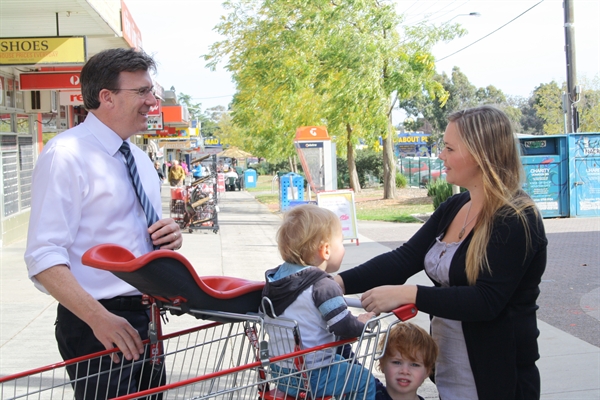 The Coalition will help Knox families, households, retirees and pensioners get ahead and plan their futures with confidence by scrapping the carbon tax as well as ensuring that tax cuts and fortnightly pension and benefit increases are kept.

Federal Member for Aston Alan Tudge MP said the announcement by Tony Abbott that the Coalition will keep income tax cuts and fortnightly pension and benefit increases without a carbon tax is good news for Knox families.

“By keeping the tax cuts and pension and benefits increases without a Carbon Tax Knox families will be better off under the Coalition,” Mr Tudge said.

“When I talk with people around Knox they tell me they are under pressure.

“This will not only help families, but also small businesses struggling with the increased cost for power.”

“We can keep the cuts and increases without a carbon tax, because we’ve made the responsible savings and have a strong plan for managing Australia’s Budget.”

“We’ll also ensure households get the full benefit of the abolition of the carbon tax by requiring the ACCC to make sure companies do the right thing.

Mr Tudge said that since the election of the Rudd/Gillard Government average electricity prices had risen by 94% and gas prices by 62%.

“Everything we do is about building a stronger economy.”

Mr Tudge said the coming election will provide electors in Knox with a stark choice: between three more years of broken promises, nasty surprises and weak excuses from the Government, or the experienced Coalition team with a Plan to build a strong, prosperous economy and a safe, secure Australia.