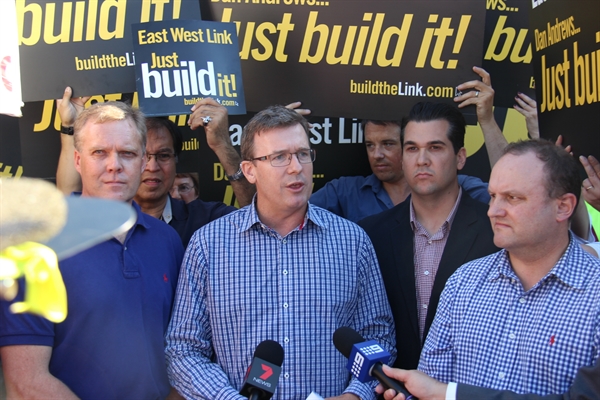 The Build the Link campaign has achieved over 11,000 signatures on its online petition within a week calling for Daniel Andrews and the Labor Government to build the East West Link.

The Federal Member for Aston, the Hon Alan Tudge MP, along with other colleagues, last week launched the ‘Dan Andrews, Build the Link’ campaign with over a hundred supporters and local businesses.

‘Dan Andrews, Build the Link’ encourages local residents from across Knox and Melbourne’s east to sign and share the petition calling on Premier Andrews to build the much needed East West Link.

“The Premier can throw $1.2 billion on the bonfire in compensation payments, or he can spend $1.5 billion and get a vital road for Melbourne for the next century.”

“The Federal government has already delivered our election commitment of $1.5 billion to the State government to build the link.”

“Premier Andrews, don’t put 7,000 jobs and $1.2 billion on the bonfire. Get our city moving again and honour the contract.”

“Victoria’s unemployment rate is 6.4 per cent and rising. The East West Link will provide 7,000 much needed jobs,” said Mr Tudge.

“East West Link will stop the Eastern Freeway coming to a full stop at Hoddle Street and take pressure off the Monash.”

To sign the petition and join the campaign, visit www.buildthelink.com.au or Mr Tudge’s Facebook page at www.facebook.com/tudgemp