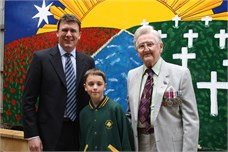 Leader of the Opposition, the Hon Tony Abbott MP, participated in a presentation of a mural made by students from Bayswater Primary School in the lead-up to Remembrance Day at the Bayswater RSL.

Unveiling the mural which was presented to Bayswater RSL President, Mr Don Hamilton, Mr Abbott spoke about the value of teaching children about the Australian Defence Force services and their role throughout our nation’s history.

Federal Member for Aston, Mr Alan Tudge MP, specifically invited Mr Abbott to visit Knox to participate in the event with students and veterans which was followed by a morning tea.

Mr Tudge said, “Students from Bayswater Primary School have done an outstanding job to produce mural which depicts our armed services and the symbols of remembrance. It is great to see the children learning about the sacrifices made by our servicemen and women in the past and which they continue to make today.”

“Importantly, the students from Bayswater Primary School along with the Bayswater RSL, have worked together in the true sense of community,” Mr Tudge said.

In designing the mural, Bayswater Primary School teacher, Corrie Huygen asked students to reflect on the wars of the past and the work of the RSL. A design by Jesse, a year five student was chosen. At the presentation, Jesse explained his mural design as the rising sun symbol being the badge worn on the hats of soldiers, the sky as the Australian flag which is what the soldiers, army, navy and air force are fighting for. The field of poppies represents the sign of remembrance and a field of crosses represents those who didn’t make it back alive. Two planes in the sky represent the Air Force and two ships for the Navy and the sun for the Army.