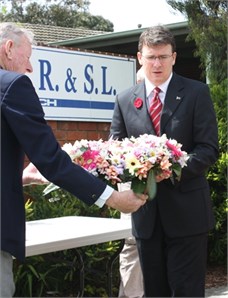 At 11 o’clock today on this, the 11th day of the 11th month, people across Knox stopped for a minute’s silence to remember those brave Australians who have fought and died for our nation.

Federal Member for Aston, Mr Alan Tudge MP, attended a short ceremony at the Bayswater RSL. Children from the Bayswater Primary School were also in attendance.

The primary Remembrance Day ceremony held by the Bayswater RSL was on Sunday 8 November 2010, to enable those who had to work on the 11th to participate in the ceremony.

Following minute silence and the Last Post bugle call in the military tradition, an array of wreaths were laid at the cenotaph to acknowledge the sacrifices made by many throughout our nation’s history.
Members of Bayswater RSL offered all attendees a red poppy, the symbol of Remembrance Day, to place at the cenotaph. During the First World War, red poppies were among the first plants to spring up in the devastated battlefields of northern France and Belgium.
The service was followed by a morning tea in the club rooms with members of Bayswater RSL.