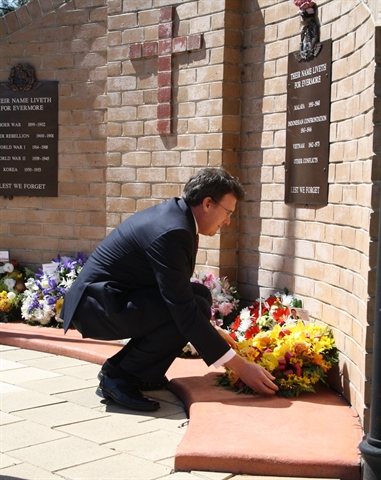 Knox residents who would like the opportunity to attend Anzac Day commemorations at Gallipoli in 2015 can apply for the ballot now, Member for Aston, The Hon Alan Tudge MP announced today.

“The 100th anniversary of the landing of the Australian and New Zealand Army Corps at Gallipoli will be one of the most significant commemorations to occur during our lifetime,” Mr Tudge said.

To ensure that Australians and New Zealanders can attend as safely, securely and comfortably as possible, a fair, open and transparent ballot is being held to allocate places for official Anzac Day commemorations at Gallipoli, in the Republic of Turkey, for 2015.

Places will be available for 8,000 Australians, 2,000 New Zealanders and 500 official representatives of all countries involved in the Gallipoli campaign.

Of the 8,000 Australian places, 2,000 will be available for special representatives such as direct descendants, the veteran community and secondary school students and their chaperones. The remaining 6,000 places (3,000 double passes) will be accessible to all Australians to apply.

Those who have already booked a tour to Gallipoli in 2015, which includes attending official Anzac Day commemorative services, must still apply for the ballot and should speak to their travel agent or tour operator regarding their arrangements.

Widows of the Australian First World War veterans do not need to apply for the ballot and will be contacted separately by the Department of Veterans’ Affairs regarding their interest in attending.

All ballot applicants must meet specific eligibility criteria including Australian citizenship or permanent residency and be a minimum of 18 years of age on, or before, 25 April 2015.

Ballots will be held for both the Australian and New Zealand places. The ballots are now open and close at midnight on 31 January 2014. Applicants will be notified of the outcome in March 2014 to allow enough time for those successful to make their travel arrangements and pay for the trip.

“I strongly encourage Knox residents who would like to commemorate the 100th anniversary at Gallipoli in 2015, to find out more about the ballot on the Department of Veterans’ Affairs Gallipoli 2015 website,” Mr Tudge said.

For more information on Anzac Day commemorations at Gallipoli, eligibility for the ballot and to apply, visit www.gallipoli2015.dva.gov.au or call Mr Tudge’s office on (03) 9887 3890. To request a paper application form, call Ticketek on 1300 364 002.