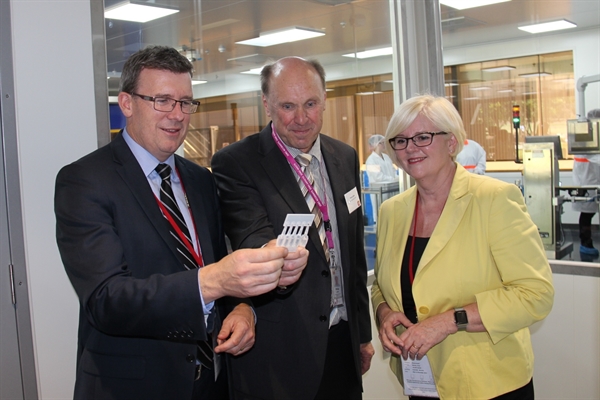 The Assistant Minister for Science, Karen Andrews, has opened a new facility at Boronia in Victoria that uses ground-breaking technology to produce a vaccine that could save the lives of thousands of children around the world.

In partnership with the Institute of Pharmaceutical Sciences at Monash University and vaccine experts in Belgium, GlaxoSmithKline has developed a new way to use blow-fill-seal technology to produce the rotavirus vaccine.

Mrs Andrews said each year, around 450,000 children die from diarrhoea caused by rotavirus infection, and another two million are hospitalised.

“The efforts of everyone involved in this project will enable children living in developing countries to receive a desperately-needed vaccine,” Mrs Andrews said.

“Vaccination is one of the greatest medical achievements in human history and I know of no more worthwhile application of Australian know?how, ingenuity and business acumen.”

The Government provided a $1 million grant to GlaxoSmithKline to help build the vaccine facility, complementing the company’s own investment of $7.7 million.

“This new facility is great news for manufacturing in Boronia,” said Mr Tudge

“Boronia is home to a world-leading pharmaceutical manufacturer and this new facility cements the place of GSK as an important local manufacturing employer.

The National Innovation and Science Agenda, launched by the Government last week, includes initiatives to promote collaboration between industry and the research sector, including a $250 million Biomedical Translation Fund to  increase the capital available for commercialising medical research.