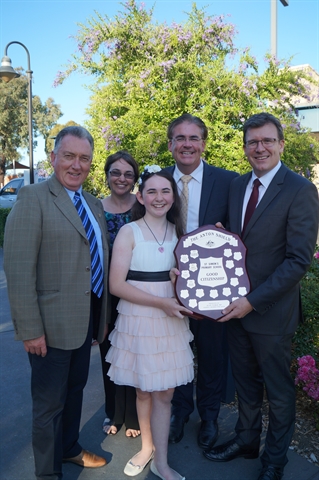 The Federal Member for Aston, the Hon Alan Tudge MP, is presenting the Aston Shield award to outstanding student role models at Knox schools in the lead up to Christmas.

Tilly Aston lost her sight when she was seven years old, a debilitating sentence in the 19th century. When she was 21 she became the driving force behind the Braille Library and the Association for the Blind. Tilly Aston established the Victorian Association of Braille Writers (now Vision Australia) to provide Braille for all in 1894. Vision Australia continues her important work to this day.

One such role model student who has won the Aston Shield is Melanie Noonan from St Simons Primary School in Rowville.

Melanie was selected for her broad contribution to the school as an arts leader and as the schools representative at the National Young Leaders Conference. Melanie also participated at District and Regional level in swimming and athletics and in creative performances at the school’s Regional Wellbeing Drama Festival.

Mr Tudge said it was a pleasure to award the shield to honour outstanding local students.

“The Aston Shield always goes to great contributors and role models in our community.”

“Congratulations to Melanie from St Simons on what is a very deserving recognition of achievement, excellent attitude and a positive contribution to the school community over a number of years,” Mr Tudge said.