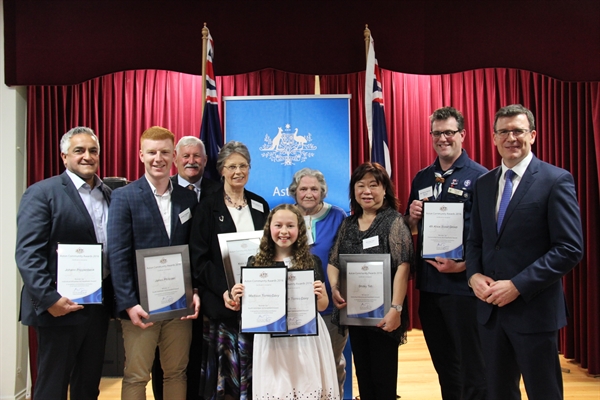 The Federal Member for Aston, Alan Tudge MP, has announced the winners of the 2016 Aston Community Awards.

The Aston Community Awards celebrate local volunteers and community groups who give their time, skill and energy to helping others and making the Knox community a better place to live.

The overall winners in the four award categories were:

Barbara is a long standing member of the Knox Historical Society; she is a Museum Guide and often presents to school tour groups. Barbara dedicated a lot of time and played a significant role on the committee which led the expansion of the Knox War Memorial at the Ferntree Gully Arboretum.

For 25 years Knox Infolink has provided assistance to many individuals in the community who are struggling with life in many forms of financial hardship, family breakdown, domestic violence or homelessness.

Shirley is a member of the Chinese Association of Victoria’s executive committee. As well as playing an active role in fundraising activities, Shirley has taken on a great role mentoring the young team at CAV and sets an excellent example through her hard work and enthusiasm.

James has been a volunteer with Foothills Community Care, Ferntree Gully Community Meal Night on Wednesday nights for 3 years. He works in the kitchen preparing meals and demonstrates a commitment to helping others.

Mr Tudge told the over 200 attendees at the presentation ceremony n Rowville, he was overwhelmed by the number and quality of nominations received in the inaugural Knox awards.

“Tonight we honour you and your service. We do so knowing that it is people like you who are the glue to our community, who build the social fabric and make our society a better place,” Mr Tudge said.