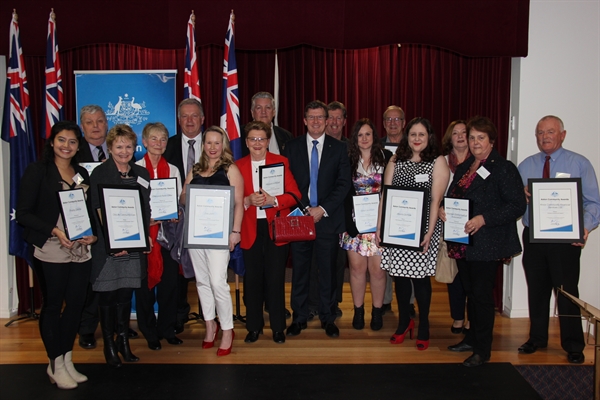 The Federal Member for Aston, the Hon Alan Tudge MP, has announced the winners of the inaugural 2014 Aston Community Awards.

The Aston Community Awards celebrate local volunteers, community groups and businesses who give their time, skill and energy to helping others and making the Knox community a better place to live.

The overall winners in the five award categories were:

Eve is a domestic violence advocate and author who raises money for a domestic abuse crisis charity through all proceeds of her book.

CityLife organised 400 volunteers for a major working bee at Boronia Heights Primary School, and have also donated bicycles to needy families within Knox.

Knox Community Financial Services run the local Bendigo Community Banks in Rowville and Ferntree Gully, having given back over $2.45 million to community groups including for the homeless, disadvantaged, sporting club and hospitals.

Philip has been a Knox resident for over 75 years and has served with St Vincent de Paul Society for 30 years, including setting up the Bayswater Vinnies shop. He still makes 800 home visits per year to help those less fortunate.

Mr Tudge told the over 400 attendees at the presentation ceremony in Rowville he was overwhelmed by the number and quality of nominations received in the inaugural Knox awards.

“We have people who have volunteered for over 50 years, people who have changed national agendas and businesses and community groups who have given endless hours and financial support.

“Tonight we honour you and your service.  We do so knowing that it is people like you who are the glue to our community, who build the social fabric and make our society a better place,” said Mr Tudge.