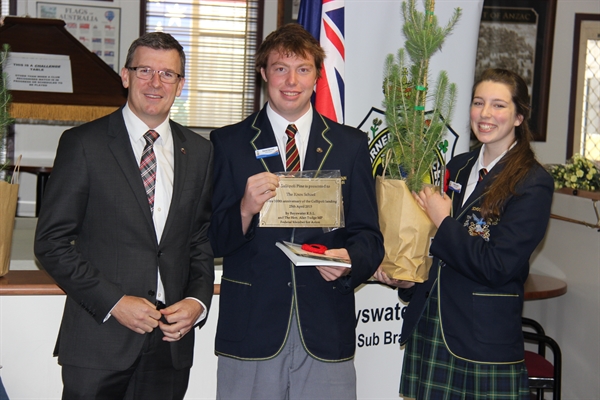 The Federal Member for Aston, the Hon Alan Tudge MP, has presented a lone pine tree and commemorative plaque to every school in Knox to commemorate the centenary of Anzac.

Mr Tudge presented the trees, plaque and a copy of Ray Peace’s Knox Anzacs – 1914-1919 book to the school captains of each primary and secondary school in Knox at the Bayswater RSL this morning.

The Aston Electorate Anzac Committee, formed as part of the Anzac Centenary Grants Program, was tasked with distributing funding to projects to commemorate the centenary of Anzac.

The Committee was chaired by Mr Tudge and consisted of community leaders including RSL Presidents, Veterans groups, school principals, Knox Council and the Knox Historical Society.

$9,237 was allocated by the Committee to the Lone Pine project to provide each school in Knox with a lone pine tree descendant of the lone pine from Gallipoli.

Presenting the trees to the school captains, Mr Tudge said it was a fitting memorial to those who had served for Australia.

“These lone pine trees will stand as a lasting memorial to those who made the ultimate sacrifice for our freedoms and way of life,” said Mr Tudge.

“During the First World War, almost one in two men aged 18 to 42 served in uniform.”

“Of those who served overseas, almost one in five never returned.”

“We will always remember and honour those brave servicemen and women who fought for our country.”

“We have 121 local servicemen and women from Knox enshrined on the new Knox Honour Roll at the Ferntree Gully Arboretum.  We honour them for their service and sacrifice,” said Mr Tudge.