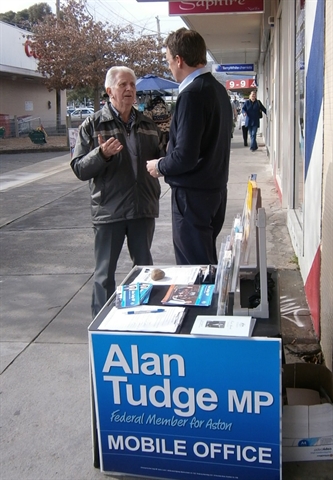 Knox residents and businesses will benefit from the Coalition’s plan to build a more affordable NBN and deliver it sooner than Labor’s NBN said Alan Tudge MP, Federal Member for Aston.

“When it comes to fast broadband, Labor has promised big but hasn’t delivered”, said Mr Tudge.

“Kevin Rudd promised everyone Australian fast broadband by 2013 at a cost of $4.7 billion.  Instead, the NBN has only signed up 10,400 users for its fibre network and the final cost is expected to be over $90 billion”

“Families, small businesses, schools and hospitals need fast broadband now and not sometime after 2021 which will happen under Labor’s plan.”

“Our plan will deliver the NBN sooner, at less cost to taxpayers and more affordably for consumers.”

“We’ll get the NBN back on track.”

The Coalition’s Plan for Fast Broadband and an Affordable NBN will:

“Our Shadow Minister for Communications, Malcolm Turnbull was one of our country’s great internet pioneers and he will ensure that local communities get the fast, affordable broadband that is so needed in the 21st century.

Mr Tudge said he was looking forward to speaking to Knox residents and businesses  about the Coalition plan to deliver fast and more affordable broadband, much sooner than Labor’s NBN.

Mr Tudge is hosting a broadband forum with the Hon Malcolm Turnbull to discuss the Coalition’s NBN plan and other issues.

The details of the forum are:

A full copy of the Coalition’s NBN Policy is available at www.liberal.org.au