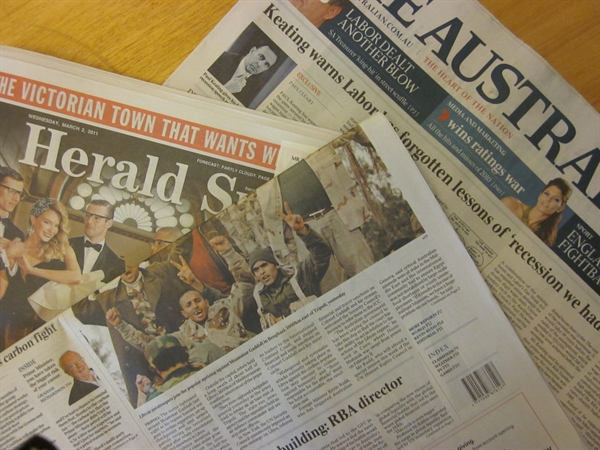 PUBLISHED IN ‘THE AUSTRALIAN’.

TOUGH decisions needed to make Australian teaching world class. The most contentious of the necessary reforms is to fire bad teachers.

The latest Organisation for Economic Co-operation and Development report on secondary school achievement shows our top students are falling behind and our disadvantaged students are not catching up. Geoff Masters, one of the report’s authors and chief executive of the Australian Council for Educational Research, correctly observes that improving teacher quality is the key. But we need a concrete policy program.

The two most important policy levers are to lift the quality of teacher applicants, and to remove teachers who don’t perform.

The most worrying trend is that the average quality of applicants to the teaching profession has fallen significantly in recent decades. Some universities have dropped their TER to as low as 56 in order to fill teaching course numbers. In 1983 the average new teacher student was in the 74 percentile of the academic aptitude distribution; in 2003, the average percentile rank had fallen to 61.

Academic aptitude is, of course, just one measure of quality in a profession that requires a broader array of attributes. However, one of the most serious consequences of our inability to consistently compete for the academically most gifted students is that content knowledge among some teachers can be poor. Bill Louden, a professor from the University of Western Australia, found that a “very large proportion of students [doing combined education degrees] cannot do grade 5 maths because it is something you can do without being any good at maths.”
There are three measures that should be considered.

First, higher minimum standard for entry into teacher education courses should be set, even if in the short term this leads to smaller intakes. The teacher profession should be leading this in conjunction with universities. A minimum TER of say 75 or 80 should be set for admission. To avoid short-term teacher shortages, incentives to enhance retention of existing quality teachers should be put in place.

Second, we should create alternative entry points into teaching. For example, I have helped establish the Teach for Australia initiative, a non-profit organisation that targets high-calibre, non-teacher graduates and fast-tracks them into the classroom after an intense six-week training course. It targets graduates who have strong
academic results as well as strong leadership and communication skills and places them into disadvantaged schools. The program is in its infancy, but the early results are positive.

A similar program could be put in place for mid-career professionals. The third and more radical idea to attract a broader pool of people to teaching is to deregulate the teaching profession. That is, give school principals the autonomy to employ whomever they believe is the best for their school, based on their own professional judgment. This would put market pressure on the quality of teacher education courses, and new private teacher education courses would establish as competitors to the public universities.

The complement to improving the quality of teacher applicants is to be more assertive at removing underperforming teachers.  Ben Jensen of the Grattan Institute showed in a recent report that Australian students would probably be the world’s highest achievers if the bottom 14 per cent of teachers lifted their performance or were replaced by better teachers.

Despite this, principals have little power to fire underperforming teachers. Nearly three quarters of lower-secondary teachers agree with the statement that in their school, teachers “with sustained poor performance are not dismissed”.

The Rudd/Gillard government has consistently talked about empowering school principals. It was one of their policies in the recent federal election, but on the crucial points of the right to hire teaching staff and especially the right to fire staff, their policy is remarkably thin. It aims to give school leaders and councils responsibility for strategic planning, operations, finances and “school staffing profile”, but there is no strong endorsement of the principle of principals hiring and firing teachers.

Principals’ right to fire underperformers seems to be a reform that is perpetually discussed but progress is disappointingly slow.  Teachers unions put forward that it is too difficult to determine which teachers are underperforming. Certainly we a need a fair system for making difficult staffing decisions, but school principals should be empowered within a reasonable framework.

There is no reason why Australia should not lead the world in education. Australia is prosperous, egalitarian and stable. The population has the advantage of speaking English and the vast majority lives in growth areas where it is easy to provide first-class education infrastructure. There is a strong tradition of non-government schools as well as quality government schooling. With a few considered reforms to improve the standing of the teaching profession, Australia would reach the top.

Alan Tudge is the federal Liberal member for Aston. He was a former deputy director of the Cape York Institute for Policy and Leadership, and senior adviser to former Coalition education minister Brendan Nelson. This is an edited extract from an article to be published by Australian Polity Magazine.