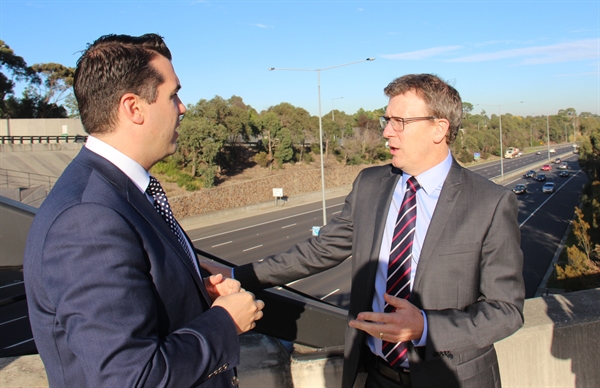 In Monty Python’s Life of Brian, John Cleese’s character receives an unwanted answer when he asks his underlings, “What have the Romans ever done for us?”

Well, nothing, they reply, apart from sanitation, medicine, education, wine, public order, irrigation, roads, the freshwater system and public health. Apart from that, nothing at all!

The same could be said in reply to Anthony Albanese who proclaimed that the East West Link “won’t fix anything”.

Well nothing, apart from taking thousands of trucks off city streets, easing the pressure on the Monash, ending the Hoddle St and Alexandra Parade bottlenecks at the end of the Eastern Freeway, effectively creating a ring road for Melbourne, and generating 7000 jobs.

The Turnbull Government wants the East-West Link built and has recommitted $3 billion in the budget to support a state govern-ment that will get on with the job.

Unfortunately Bill Shorten and Mr Albanese, Labor’s infra-structure spokesman, are mimicking Daniel Andrews. Federal Labor’s main argument against the congestion-busting road (apart from “it won’t fix anything”) is that it does not stand up on a cost-benefit analysis.

Putting aside their willingness to ignore such analysis when it suits (such as the $43 billion NBN, developed on Kevin Rudd’s napkin), the argument is wrong.

The final business case showed a return of $1.40 for every dollar invested. Most businesses would kill for that sort of return. The real reason both federal and state Labor continue to oppose the East-West Link is because they remain beholden to their inner-city electorates at risk from the Greens.

While those seats are under threat, East-West link injury the outer suburbs miss out. But the $1.1 billion of wasted money from cancelling East-West Link isn’t the end of the pain for Melbourne motorists and Victorian taxpayers.

In a further blow to residents, particularly in eastern and south-eastern suburbs, the Western Distributor project is being funded by extra tolls right across the CityLink network, including the Monash.

This means those residents have not only been deprived of the East-West Link at a cost of $1.1 billion, but they will continue to pay CityLink tolls for at least another 10 years to fund a road they may never use.

Residents in the east, should not be tolled for a road in the west.

For an eastern suburbs motorist who travels the entire CityLink up and back each work day during those extra 10 years of tolls, will be about $4000 per year worse off.

At the same time, the road project that would provide the greatest benefit to Melbourne motorists — the East-West Link — is on hold while the Andrews government remains in office.

No wonder residents in the eastern suburbs feel abandoned by Labor.

The East-West Link will have to wait for a responsible state Coalition government to build it.

In the meantime, the Turnbull Government has allocated $500 million to deliver a $1 billion expanded Monash project going much further than the Victorian Government has proposed. This project would deliver widening going west to Warrigal Rd and east to Cardinia Rd.

A further $350 million has been allocated for the upgrade of the Metropolitan Ring Road, and $220 million for the Murray Basin Rail Project to move goods to key ports in Geelong and Portland.

But it’s clear that Labor’s billion-dollar East-West Link insult, now followed by the injury of higher tolls, will not be forgotten by people in Melbourne’s eastern suburbs.