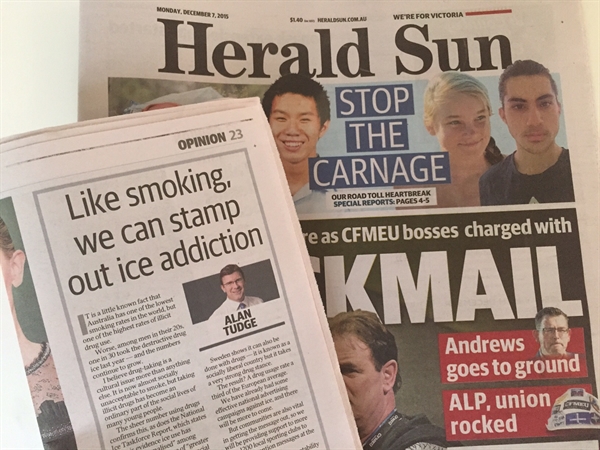 IT is a little known fact that Australia has one of the lowest smoking rates in the world, but one of the highest rates of illicit drug use.

Worse, among men in their 20s, one in 30 took the destructive drug ice last year — and the numbers continue to grow.

I believe drug-taking is a cultural issue more than anything else. It is now almost socially unacceptable to smoke, but taking illicit drugs has become an ordinary part of the social lives of many young people.

The sheer number using drugs confirms this, as does the National Ice Taskforce Report, which states there is evidence ice use has become “normalised” among young people because of “greater exposure and an emerging social acceptance of the drug”.

This is a disturbing conclusion for parents worried about their teenage or adult children.

Even more disturbing, all our efforts to cut the supply of the drug have made no impact on its price or availability.

Users say it is easier to get than ever, taking an average of only 20 minutes to do so in Melbourne.

Being a synthetic drug, it is easy to manufacture. One disrupted source is easily replaced.

Ice can be defeated only by reducing the demand for it.

We have to make it socially unacceptable to take the drug and help addicts get off it.

This understanding is at the heart of the federal government’s new ice plan announced yesterday.

Of course, it includes continued efforts to disrupt the supply of the drug, including tens of millions more in cracking down on the criminal organisations that underpin the ice market.

But we will never defeat ice on the supply side alone.

As a society, we have successfully changed cultural attitudes in other areas — and we can do it with drug use, too.

In the early 1990s, for example, a quarter of the population smoked daily. That has halved through anti-smoking campaigns.

There has been no equivocation with the message — “smoking kills” and “every cigarette causes you damage” — and it has been backed up with strict rules around advertising, packaging and where one can smoke.

Today, it is no longer “cool” among young people to smoke, and usage continues to decline.

The same has occurred with drink-driving, where it is now socially unacceptable to drive when intoxicated.

There are now more deaths on Victorian roads because of ice than alcohol — and similar success has been had with seatbelts, speeding and safe sex. Concerted campaigns with clear messages have changed attitudes.

Sweden shows it can also be done with drugs — it is known as a socially liberal country but it takes a very strong drug stance.

The result? A drug usage rate a third of the European average.

We have already had some effective national advertising campaigns against ice, and there will be more to come.

But communities are also vital in getting the message out, so we will be providing support to more than 1200 local sporting clubs to deliver prevention messages at the grassroots level.

Tackling the social acceptability of drug-taking counters what many “experts”, who want more “understanding” of drug use, say.

They tell us people take drugs because they are depressed, disadvantaged or vulnerable.

These reasons may explain why some take drugs, but most usage is because of social factors.

The National Drug Strategy household survey of 24,000 people showed two-thirds of people took up drugs for the first time because of peer group pressure or simply to experiment, while only 7 per cent took them to feel better.

Even among existing users, fewer than a third say they continue to take ice to lift their mood or because of addiction.

This all suggests continued prevention campaigns can be effective.

Of course, those addicted to the drug, or feeling down and starting to experiment, need help.

But we constantly hear people can’t get access to treatment services when they need them.

The ice plan allocates almost $250 million, delivered at the local level, to help change this.

There are other elements to the plan, including greater online resources to support families and carers of those using ice, and better research to inform future policy.

More than 200,000 people use ice. For some, it may have minimal long-term impact but for many, it will wreak havoc on themselves, their families and communities.

Some will tragically die as a result, while others will get off it but never be the same again.

The executive director of the United Nations Office on Drugs and Crime stated in 2007 that “societies have the drug problem that they deserve”.

Australia deserves better than being seen as the biggest ice users. Our ice plan will hopefully be the start of that change.